The Supreme Court’s recent decision in a case challenging the Federal government’s regulation of the price of raisins as a takings did not establish any constitutional principles, but may make it easier to bring takings cases in the future by eliminating some of the procedural roadblocks usually employed by government in such cases. Stay tuned for the ruling on the merits in this case.

BERKELEY—A powerful city agency that regulates some rental rates and intervenes in disputes is facing calls for an overhaul after a highly critical grand jury report in June labeled it “a self-sustaining bureaucracy.”

The resulting grand jury report found the agency to be a “bureaucracy that operates without effective oversight and accountability.” The report said the board heavily favored tenants by hiring a lobbyist for pro-tenant issues and contracting with local nonprofits to help tenants fight eviction. The board has raised rental-unit registration fees paid by landlords from $22 at the beginning of rent control in 1980 to $194 today.

Rent Stabilization Board members are elected to serve for four years and are limited to two terms. Members run in contested elections and can solicit contributions from residents, tenants and property owners.

END_OF_DOCUMENT_TOKEN_TO_BE_REPLACED

By BRENT KENDALL And JACOB GERSHMAN

WASHINGTON—The U.S. Supreme Court on Monday turned away a constitutional challenge to New York City’s decades-old rent regulations, refusing to take up the case of an Upper West Side landlord and his wife who argued that the government had violated their rights by forcing them to subsidize their tenants.

The high court refused without comment to hear the appeal of James and Jeanne Harmon, the owners of an Upper West Side brownstone. The couple sought to strike down the rules shielding three of their tenants—and about two million other New Yorkers—from market prices.

Lower courts had rejected the plaintiffs’ rent-control challenge. The case gained little attention until the Supreme Court in December requested that New York officials file written responses to the plaintiffs’ high-court appeal. That the court would signal any interest in taking a fresh look at a long-established law surprised legal experts on both sides. But the Harmons ultimately failed to persuade at least four justices to hear the case.

“Rent regulation in New York City has a long history, and the court properly left it to elected state and city officials to decide its future,” said Alan Krams, a senior counsel at the city’s law department.

The Harmons argued that the rent rules amounted to a government seizure of private property without just compensation, violating the Fifth Amendment. One of their longtime tenants, an executive recruiter, pays about $1,000 a month for a one-bedroom unit, while owning a weekend home in the Hamptons. The couple also contended that the long sustained “public emergency” underpinning the rent controls violated due process.

END_OF_DOCUMENT_TOKEN_TO_BE_REPLACED

This week Mayor Michael Bloomberg signed off on a three-year extension of New York’s rent-control laws. The irony is that these laws distort the housing market and thus create more problems than they solve.

This week Mayor Michael Bloomberg signed off on a three-year extension of New York’s rent-control laws, which put a ceiling on how much landlords can charge tenants. There are more than a million rent-regulated units in New York, and advocates insist that they are necessary to ensure “affordable” housing. The irony is that these laws distort the housing market and thus create more problems than they solve.

“The rent regulation itself causes the shortage because landlords know they’re not going to get a good return for massively investing in upgrading their housing, so a lot of the existing housing deteriorates,” said Nicole Gelinas of the Manhattan Institute in an interview. Developers can build luxury housing that doesn’t come under rent control, she added, but that doesn’t help low- and moderate-income people who can’t afford to live in a Trump Tower. Without rent-control, there would be a greater incentive to build housing for people other than the wealthy.
And then there’s the irony of the left supporting the elites who take advantage of rent control even when they can afford to pay market rates for housing. Ed Koch kept a rent-controlled apartment the entire 12 years he was mayor of New York and lived somewhere else. Former New York Gov. David Paterson and Harlem Congressman Charlie Rangel also have maintained rent-controlled properties — Mr. Rangel was recently fined by the Federal Election Commission for misusing a rent-stabilized apartment as a campaign office. Celebrities like Mia Farrow, Faye Dunaway, Shelley Winters and others have occupied rent-regulated apartments, often while also owning mansions elsewhere.
Where are the “1%” bashers when you need them?
Source: Wall Street Journal

What’s the difference between price controls on milk and price controls on rent? Do landlords in Manhattan and trailer-park owners near San Diego have the same rights? Is rent stabilization in New York City a foolish racket or a rational policy to help tenants?
The fate of New York City’s rent laws could hinge on answers to these questions. As the Journal reported Monday, the U.S. Supreme Court is taking a surprisingly serious look at a federal lawsuit in which a Manhattan couple is trying to overturn the regulations shielding their tenants. END_OF_DOCUMENT_TOKEN_TO_BE_REPLACED

New York City landlords may get a hearing before the Supreme Court, arguing that rent regulation laws smack into the Fifth Amendment’s safeguards against government seizure of private property without just compensation.  What do you think? Are such laws important in keeping big cities affordable for the lower and middle classes? Or are they too burdensome on private property owners? END_OF_DOCUMENT_TOKEN_TO_BE_REPLACED

At the center of a property dispute that could upend New York City’s rent regulations is an apartment dweller from one of America’s oldest families that has a nearly four-century history of hanging on to valuable homes. 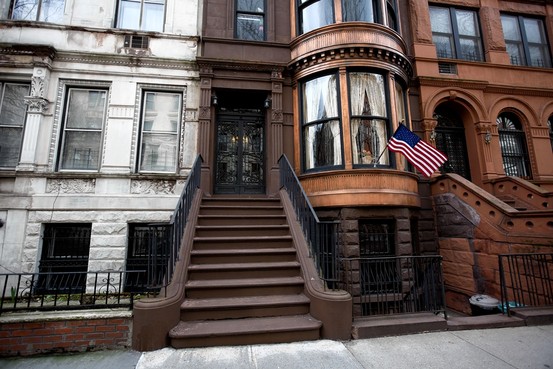 The building at 32 W. 76th St. is at the center of a lawsuit.
For the past four years, an Upper West Side couple who own a copper-clad, Beaux-Arts brownstone on West 76th Street have been in federal court to overturn the rent regulations shielding their tenants. One of those tenants is Nancy Wing Lombardi, an executive recruiter who pays about $1,000 a month and has lived in her one-bedroom unit since 1976.
Ms. Lombardi’s home is a star exhibit in James and Jeanne Harmon’s federal lawsuit challenging the constitutionality of the state’s rent regulations, which restrict how much landlords can raise rent on about two million New Yorkers.
The couple’s suit has lost in U.S. District Court and the Second U.S. Circuit Court of Appeals, but now the U.S. Supreme Court is taking a harder look at their appeal than anyone expected. The justices asked the city and state to respond to the Harmon suit by Monday. END_OF_DOCUMENT_TOKEN_TO_BE_REPLACED

The RSA Property Rights Blog provides a forum and compendium for matters related to rent control specifically and property rights in general. This blog tracks legal and legislative challenges to rent control regimes worldwide and reports on other property takings issues. Initially created to track the progress of Harmon v. Kimmel, a test of the constitutionality of New York City’s rent stabilization law which the Supreme Court refused to hear, the RSA Property Rights Blog now casts a broader net on property rights issues which may be relevant to or impact on New York’s rent laws.

The RSA Property Rights Blog  is sponsored by the Rent Stabilization Association, the leading trade association representing and protecting the interests of rental property owners in NYC.