Private apartment owners should not have to fund a

BY RICHARD A. EPSTEIN

People who don’t live in New York City probably haven’t confronted the market-distorting injustices of rent control and similar rent-stabilization laws. But they may recall their outrage in 2008 upon reading that New York Rep. Charles Rangel worked the system by paying a total of $3,894 a month for four rent-stabilized luxury apartments in Harlem, about half the market price.
Remarkably, a serious constitutional challenge to rent-control and stabilization laws may finally be in the works. The challenge arises from James and Jeanne Harmon, who own a town house on West 76th Street in New York City. The upper floors are occupied by tenants who are entrenched under New York’s rent-stabilization law, paying rents at only a fraction of the value of their units. Mr. Harmon, a most persistent man whom I have from time to time advised, is attempting to strike down this law.
The Second Circuit Court of Appeals blew off his suit in March, but Mr. Harmon has filed petition for certiorari in the Supreme Court, and, miracles of miracles, the high court has asked New York City and the tenants to respond. His story has been sympathetically featured in the New York Times, the Daily News and the New York Post. Perhaps there is still some life in the challenge to rent controls. There darn well ought to be.
In broad and emphatic language, the Fifth Amendment to the Constitution provides that “no person shall be . . . deprived of life, liberty, or property, without due process of law; nor shall private property be taken for public use, without just compensation.” Rent control collides with the last prohibition, the “takings clause.”
All versions of rent-control laws share a single dominant characteristic: They allow a tenant to remain in possession of property after the expiration of a lease at below-market rents. New York even gives the tenant a statutory right to pass on the right to occupy the premises at a controlled rent to family members who have lived with them for two or more years. The tenants in Mr. Harmon’s complaint pay rent equal to about 60% of market value.
Enlarge Image 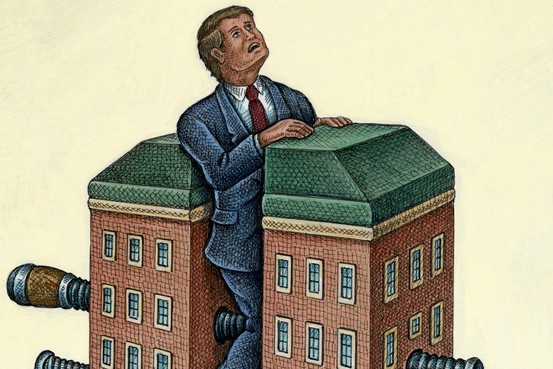 The Second Circuit recognized that the Harmons would be entitled to just compensation when their property is subject to a “permanent physical occupation.” But following the Supreme Court decision in Yee v. City of Escondido(1993), the court insisted that “government regulation of the rental relationship does not constitute a physical taking.” That comes as a real surprise to the Harmons when they hear footsteps each night above their bedroom.
Supreme Court decisions dating back toBlock v. Hirsh (1921) hold that once a landlord has let a tenant onto the premises for a year, the legislature can extend that lease indefinitely. In so doing, the court undermined the most basic proposition of property law—namely, that property interests are defined by both space and time. Traditional common law rightly treated the tenant who overstayed his lease as a trespasser whom the landlord could evict at will. Rent control upends this relationship.
Supreme Court Justice Antonin Scalia exposed the deeply antidemocratic nature of rent control in Pennell v. City of San Jose (1988). If the government thinks some high social end is served by allowing tenants to sit on someone else’s property in perpetuity, then it should use public funds, after democratic deliberation, to buy or lease the premises for market value which it can then lease out to particular tenants. The correct way to handle this issue, he wrote, is by “the distribution to such persons of funds raised from the public at large through taxes,” and not to use “the occasion of rent regulation to establish a welfare program privately funded by” landlords.
Mr. Harmon’s grievance should resonate on social as well as personal grounds. Rent control and rent stabilization are inimical to the long-term health of New York City. Ordinary tenants paying market rents contribute their fair share to the public treasury. By contrast, rent-controlled tenants on lifetime leases who have a specially privileged legal status are a constant drain on the community, discouraging investment in residential rental real estate by posing a persistent if inchoate threat of subjecting future properties to rent control.
Mr. Harmon is asking the Supreme Court to uphold the Constitution and make right a long-standing wrong. It should take up his invitation and do so.
Mr. Epstein is a professor of law at New York University and a senior fellow at Stanford University’s Hoover Institution.